Although many Bavarian traditions are already dying out in Munich, people still like to cook and eat Bavarian food. The classic food in Bavaria is quite high in calories and hearty. (Pork) meat, pastries, sauces, dumplings and cabbage are characteristic. The cuisine in Bavaria is strongly related to the cuisines of the neighbouring regions, especially Franconia, Austria, Swabia and Bohemia (Czech Republic). Menus in restaurants are often written in Bavarian to emphasize the local tradition of the food.

Soups are the classic appetizer in an inn in Bavaria. On many menus you will only find soups under the heading „Starters“. Popular are the semolina dumplings soup (small semolina dumplings), baking pea soup (baking peas in beef broth), liver spaetzle soup or liver dumpling soup (dumplings made of liver with chives). 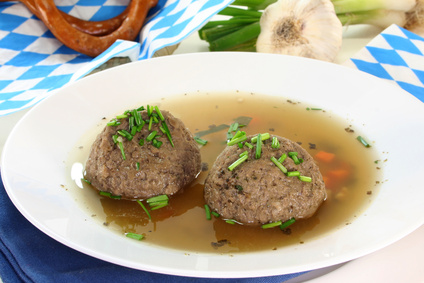 Mushroom soup means mushroom soup (often champions and/or oyster mushrooms). Kupiziner soup is a soup with liver sausage, onion and egg. Sounds a bit strange, but tastes good. The pretzel soup is Bavarian: a beef soup with onion and roasted pretzel pieces. The bread soup is similar (instead of the pretzel you use brown bread).

Probably the best known in Bavarian cuisine is the knuckle of pork. It is a whole thigh of a pig with bone and skin, usually served with bread or potato dumplings. Of course sauerkraut is served with it. If the knuckle of pork is still not fat enough, you can order surhaxn (like Schweinshax’n but with more fat). 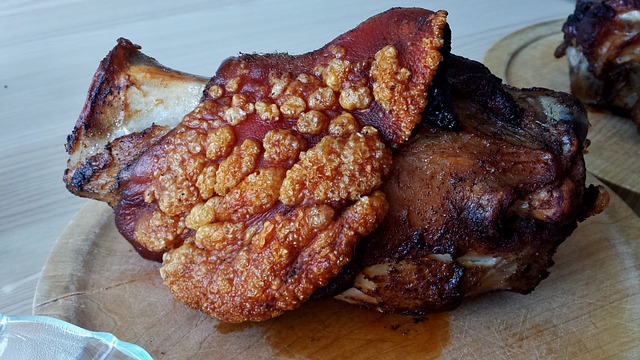 The knuckle of pork is the figurehead of Bavarian cuisine

The classic roast pork is also often eaten with dumplings and sauerkraut. Instead of sauerkraut, roast pork is often served with cabbage salad with bacon. The beer roast is a roast pork with a tasty beer sauce.

Maultauschen are more likely to come from Swabian cuisine and are dumplings filled with minced meat and spices, considerably larger than the Italian ravioli.

Pichelsteiner Stew: Vegetable stew with meat (beef, pork and lamb, celery, carrots, leek and parsley). Pichelsteiner Stew is not suitable for vegetarians, but it is one of the few Bavarian dishes with a high vegetable content. 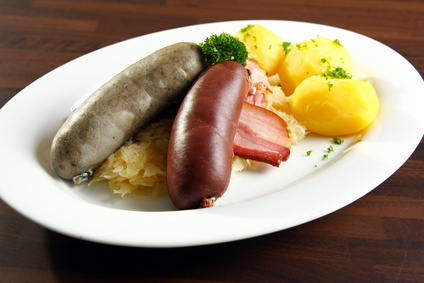 Plate-meat is eaten like white sausages as a snack in the morning. It is boiled beef with horseradish and usually some chives.

Very good tastes filled veal breast (filled with bread dough and parsley). It is one of the expensive dishes on the Bavarian menu.

Roast duck and roast goose (also usually with potato dumplings or bread dumplings) are more common than in other regions of Germany. Geese are also offered in the Bavarian kitchen, especially around Christmas. Duck is also more common in winter.

There are many recipes for game because of the large Bavarian forests. Of course game meat is expensive in Bavaria too. Popular recipes are for example: Venison stew, saddle of hare, hare stew, wild boar goulash, saddle of venison, venison leg, roast venison, partridge (partridge) with bacon, pheasant, stuffed wild pigeon and stuffed wild duck. Game dishes are also popular at festivals such as Christmas (classic e.g. on Boxing Day).

Gladly also innards are served. The best known offal dishes are sour Lüngerl, calf kidneys and baked calf’s head. Tripe is an elongated piece of meat cut from the stomach of a cow – often as sour tripe with vinegar.

Very often you can find meatballs in Bavaria. These are high-quality boulettes (or meatballs, meat loafs or meat cakes depending on the origin of the reader). You can often get them at the snack bar in a roll (roll) or with potato salad. Less common in Munich are Fischpflanzerl (meatballs made of fish).

A recipe originating from the Swabian is the onion roast roast. This is a roast of fillet of beef with fried onions, often served with Spätzle or real Swabian with Schupfnudeln. Zwiebelrostbraten is delicious, but not cheap.

A well-known Bavarian sausage variety is the press-sack. The white press sack is a sausage speciality made of offal with vinegar. The red press sack (also called black press sack) does not contain vinegar but blood (hence the colour). Sulz is a plate of meat in aspic and some vegetables with lots of vinegar.

Popular side dishes are bread dumplings, which taste best homemade from old rolls (buns), eggs, milk, salt and parsley. Potato dumplings are about as common and have slightly fewer calories. Spätzle (actually from Swabia) are homemade noodles made from simple ingredients: flour, milk, eggs and salt. Simple good recipes of the Bavarian and Swabian cuisine made of Spätzle are Krautspätzle (fried Spätzle with sauerkraut, bacon and onion), Kässpätzle (Spätzle mixed with melted Emmentaler and onion). Also very Swabian, but certainly to be found in Munich, are Maultaschen as side dishes (filled large noodles with minced meat, eggs, parsley and onion).

Sauerkraut is very often served with meat dishes. The most important salad is coleslaw with bacon. Bacon is added to the cabbage, often also garlic, onion and caraway. Often a small mixed salad is served in restaurants as a side dish (e.g. salad of cabbage, tomatoes, potatoes, cucumber and radish). In Bavaria, bread is usually served with cold dishes, not with hot dishes.

Reiberdatschi are potato pancakes, for example, and are not uncommon in Bavarian cuisine.

The plum-dachi is eaten with pleasure. The dachi is a sheet cake with fresh plums – especially in late summer and autumn.

Yeast dumplings originally come from the Austrian kitchen. They are yeast dumplings filled with peacock puree and are served with poppy seed and vanilla sauce.

Krapfen (doughnuts) are available from the baker and are often eaten at carnival.

Plum dumplings are a recipe of potato dumplings with sugar, cinnamon, vanilla sauce with a plum in the dumpling. More rare and similar are cherry dumplings.

The most important and world-famous „Brotzeit“ is of course the Weißwurst. According to old tradition it should be eaten until 12 o’clock in the morning. In the rules there is an oven-fresh pretzel (Brezn) and a beer, usually often wheat beer (Weißbier).

Leberkäse is very popular. Many Munich residents have their favourite butcher’s shop with their favourite Leberkäse. Very popular as a snack is Leberkässemmel. This tastes better in Bavaria than elsewhere because it is made with freshly baked Leberkäse. Leberkäse consists neither of liver nor cheese, but mainly of beef. 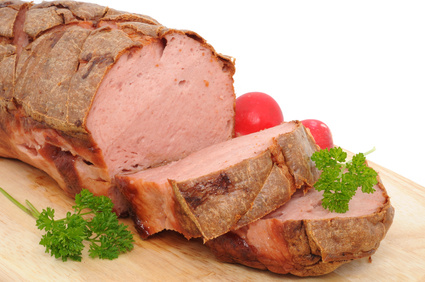 A very popular cheese in Bavaria is Obatzda, a dressed camembert with onion, chives and caraway.

Schweinsbratwurst are very good tasting bratwursts – in restaurants often as a side dish e.g. potato salad.