Munich’s public transport system is considered one of the best in the world – but unfortunately not one of the cheapest.

There are eight subway lines and seven suburban train lines in Munich. Hardly any house in Munich is more than 500 meters away from the nearest rapid transit station, and most houses are even considerably less. The few gaps are closed by trams (Munich: Tram) and buses. In total there are almost 300 rapid transit stations in the Munich transport network, about 100 underground stations and 200 S-Bahn stops. 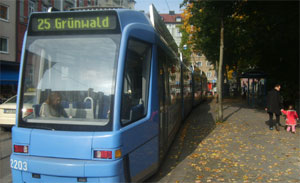 In Munich the tram is officially called Tram

In the city centre there are almost no buses, the subway and the suburban train that also runs underground here. The subway is used especially by passengers whose starting and end point is within Munich. The U-Bahn is much more reliable than the S-Bahn. The old S-Bahn is notorious for its many delays in Munich.  The S-Bahn goes to the surrounding area and to the Munich airport (two lines to and from the airport, both depart from the central station and from the central Marienplatz).

Price examples: Single ticket (city area): 2,80€, day ticket (only city area, called interior): 6,60€. Monthly tickets are quite cheap, yearly tickets even cheaper. However, these do not bring the tourist too much. The homepage of the MVV (Münchner Verkehrsverbund) is almost perfect – also the online timetable information. Very interesting for tourists are also partner day tickets, 3-day tickets, weekly tickets and much more. Weekly tickets and monthly tickets are transferable to other people. (Prices from the year 2017). The Bayern Ticket is valid on Munich’s public transport system and is also sold in the ticket machines in the underground and suburban train stations.

The older model of the subway. In the meantime (2017), a completely new subway model called C2

By bicycle in Munich

Munich is a city with a great many bicycle paths. Many sidewalks were divided in the middle and the part of the sidewalk facing the street became a bicycle path. The large parks and the surrounding area of Munich are also perfect to explore by bike. Bicycles can be rented directly at the main station from a subsidiary company of the railway (Callabike). However, this is not quite cheap – according to my information currently (2014) about 15 € per day. Owners of a Bahn-Card get the bikes much cheaper – for 9 € per day. There are also minute prices for short term rentals. Members of Callabike can rent bikes at many locations in Munich (information without guarantee).

By car in Munich

Those who drive through Munich with a car or even a rented car are, according to my opinion, to blame themselves. Finding a parking place can be a nightmare in the inner area of Munich. Public parking places and parking garages are extremely expensive and oftenly full.