Besides Marienplatz and Karlsplatz (Stauchus), Odeonsplatz is one of the three most important squares in the centre of Munich. The Odeonsplatz is also an important underground junction. It is the starting point of the Ludwigstraße, a broad boulevard with old magnificent buildings, which has a very cosmopolitan appearance. The Odeonsplatz is and was in the past an important place for demonstrations, parades and parades. For example, the Hitler putsch was crushed here and the funeral procession for Franz Josef Strauss took place here. 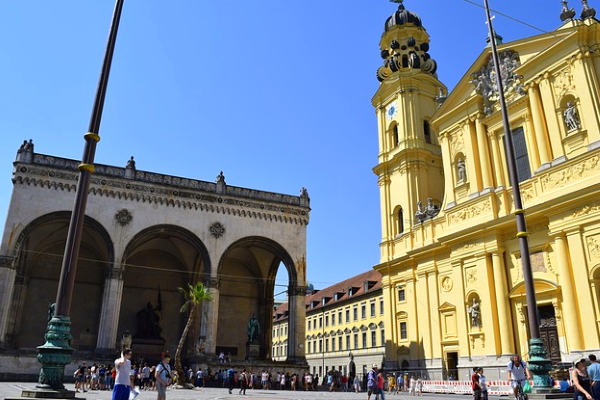 The Odeonsplatz Munich is named after the Odeon. The Odeon is a former large concert hall, which was largely destroyed in the Second World War. After the reconstruction, the Odeon became the home of the Bavarian Ministry of the Interior. The building still has this function today.

The Odeonsplatz was built by the architect Leo von Klenze around 1820, who redesigned the entire Ludwigstrasse, whose southern end is the Odeonsplatz. His client was King Ludwig I. A large monument on the Odeonsplatz in Munich reminds of the famous King of Bavaria. Today, most of Odeonsplatz is part or rather the northern end of Munich’s extensive pedestrian zone.

There are three important buildings on Odeonsplatz:

Directions and surroundings of Odeonsplatz

The subway lines stop under the square: U3, U4, U5, U6. Thus, the station „Odeonsplatz“ is one of the most important transfer stations of the Munich subway (next to Marienplatz, Haupbahnhof and Sendlinger Tor). The tourist bus line 100 also stops here. Odeonsplatz can only be reached by car from the north (Ludwigstraße). However, parking spaces are hardly available in this area. From Odeonsplatz you can reach the Pinakothek der Moderne, the most visited art museum in Munich, in a few minutes on foot. About 150 meters to the south (into the pedestrian zone) is the Bavarian State Opera. The Theatinerstraße south of Odeonsplatz is a pedestrian zone with well-known shops for luxury goods.