The Residenz is one of the most important sights in Munich. From the 16th century to 1918 it was the residence and seat of government of the Bavarian rulers: the kings, electors and dukes of the Wittelsbach dynasty. 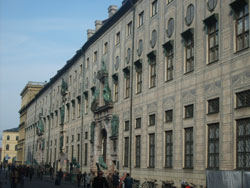 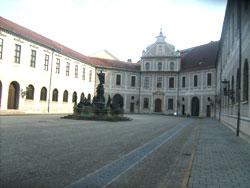 In the huge residence there are over 100 state rooms. Many banqueting rooms and other larger rooms are from the time of King Ludwig I. The Residenz in Munich was built in various styles over the centuries, e.g. Renaissance, Baroque and Rococo. Today the building houses the Residenzmuseum, the Münzmuseum and the Spanish Cultural Institute. For free you can visit the many inner courtyards like the Brunnenhof, Kaiserhof, Kapellenhof and Apothekerhof.

Interesting in the Residence are for example the Nibelungensäle. In several large rooms, parts of the plot of the Nibelungen saga are depicted in murals. The Königsbau with its magnificent, classical furniture and rooms, such as the throne room, are no less impressive. 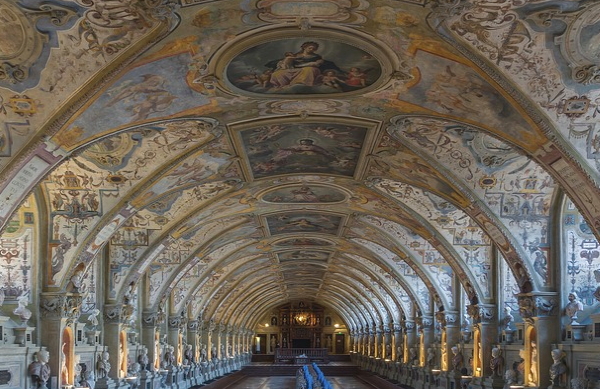 Even more bombastic are the imperial rooms, for example the Kaisersaal and Vierschimmelsaal. All in all, the Residenz in Munich is one of the most significant and imposing castles in Germany and is a „must“ for a historically interested visitor to Munich.

Another highlight within the residence is the Cuvilliés Theatre. Although only partially preserved, it is one of the most important and beautiful rococo monuments in Germany. One reaches the Cuvillies Theater through the Brunnenhof.

Opening hours Residenz München 2017: Summer daily 9-18, Winter 10-17. The last admission is one hour before closing time. These times also apply to the Treasury. The Cuvilliés-Theater is only open in the afternoon outside the main season, but on Sundays the opening hours are the same as for the Residenz all year round.

Admission prices Residenz-Museum Munich: 7 € adults, 6 € reduced admission or with the Treasury 11 € (9 € reduced). The prices are from 2017 and have not been increased for several years. Those who only want to visit the treasury also pay 7 €. But you should really visit both, it is worth it! As far as we know there is no possibility to buy tickets for the Residence on the internet (advance booking).

There are no general guided tours in the residence, but you can rent one of the free audio devices. In total, one should plan several hours, the residence is huge.

The architectural model for the Residenz in the capital of Bavaria was mainly the Palazzo Pitti in Florence. More information about the Italian city of Florence can be found on this website.

Site plan of the residence

Directions to the residence: underground: U3, U4, U5, U6 Stop: Odeonsplatz. From Odeonsplatz it is only a few steps to the Residenz. The Residenz is located in the middle of downtown Munich and has no parking spaces. If you come by car, you can use one of the expensive parking garages in the center of Munich. It is better to leave your car on a Park-and-Ride parking lot on the outskirts of the city. These are free of charge, one only has to pay the subway.