Oberammergau, a municipality with 5000 inhabitants about 100 km south of Munich in the foothills of the Alps, is one of the most popular tourist destinations in Bavaria. In recent years, this has increasingly been the case for foreign tourists from North America, Japan and China. The village looks like a Bavarian museum in large parts. Oberammergau is worth a visit for three different reasons at once: It is world-famous for its woodcarvers and wood carvings. In addition, the facades of many houses are painted – in the style of Bavarian Lüftlmalerei, a great sight (see picture). Last but not least the visitors come because of the Passion Play Theatre, where every 10 years the world famous gigantic Oberammergau Passion Plays take place. 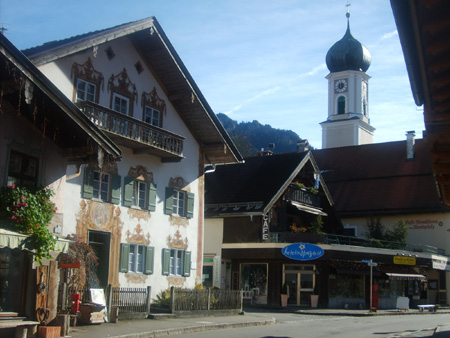 In the centre of Oberammergau

The whole inner part of Oberammergau looks like an open-air museum. During the season thousands of tourists stroll through the centre every day. Almost every 2nd house is a souvenir shop, a restaurant or a wood carving shop. All sights can be reached on foot in a few minutes. Worth seeing is the Passion Playhouse in the north of the centre. A little to the south are the most beautiful houses for fans of Lüftlmalerei – above all the Pilatushaus (see picture at the top).

The woodcarvings from Oberammergau 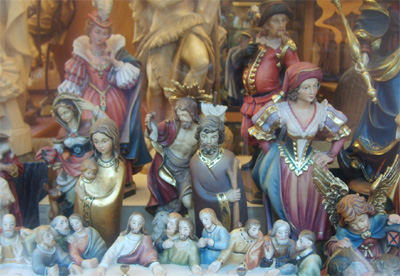 Most carvings have a religious background

Among connoisseurs the traditional wood carvings from Oberammergau are world famous. Above all Christian motives are represented. There are over 100 (!) wood carvers (wood sculptors) in Oberammergau. The products can be purchased in dozens of shops. Unfortunately, the carvings are not quite cheap, as they are of course without exception genuine handicrafts, which are produced in one of the richest areas of Germany. But there is something for every wallet – smaller woodcarvings are not too expensive. 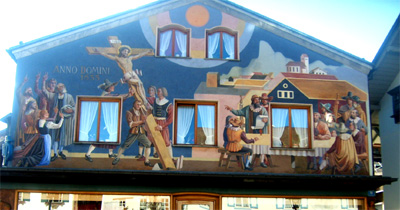 House with Lüftlmalerei in the centre of Oberammergau

An art form that only exists in Upper Bavaria. Oberammergau is probably the place of origin of the painting style Lüftlmalerei. At least, there is no other place where there are so many „Lüftlmalerei“ houses as in Oberammergau. It is a form of facade painting which is very durable. The trick is: The Lüftlbilder are applied to the fresh, still wet plaster. The colours thus penetrate deeply and the pictures look like new for years. Often only simple facade decorations are shown. Other Lüftl-paintings are Christian motives or traditional village scenes.

Certainly this is the most important sight in Oberammergau. The great, world-famous Passion Plays take place here every 10 years. The next performance years are 2020, 2030… . There are over 1500 actors taking part in some plays! But also outside the performance time the visit of the Passion Play Theatre is interesting. During the day there are guided tours every hour. Without a guided tour, it is unfortunately not possible to enter the interior of the playhouse with its almost 5,000 seats.

The good and large museum in the centre is open every day except Monday from 10 a.m. to 5 p.m. in the summer half year and costs 6 euros admission for adults in 2015, including the visit to the famous glass paintings in the Pilatushaus. In addition to the museum and the Pilates House, this combined admission ticket also allows you to visit the Passion Playhouse.

By train it takes just under 2 hours from Munich. You have to change trains in Murnau. There are hourly connections. The small train between Oberammergau and Murnau is coordinated with the timetable from and to Munich. In the southern direction there are some buses daily to Garmisch-Partenkirchen (via the monastery Ettal). If one wants to make a day trip from Munich to Oberammergau, the Bayern-Ticket is recommended (for one person/day: 25 Euro, for up to 4 additional passengers the Bayernticket costs 6 Euro more per person, thus e.g. 43 € for 4 persons, prices from 2017). 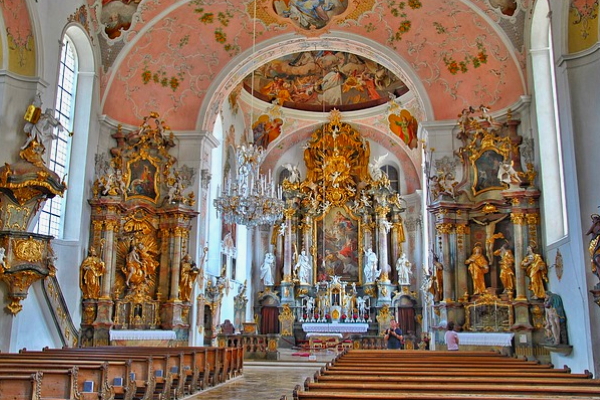