The company Sea Life operates more than 30 adventure aquariums in Europe. One of them is the Sea Life Centre in the Olympic Park in Munich, which was opened in 2006. In the first months it was the attraction in Munich: There were already long beats in front of the entrance door every morning. In the meantime it has become much quieter, at least on weekdays outside the holiday season. There are about 30 smaller and larger pools with 150 different species of fish in Sea Life Munich.

Like in a zoo the daily feedings are one of the main attractions. The Sea Life is thematically well structured – you start your tour with fish from the Isar river, which flows through Munich. One follows the Isar water into the Danube and into the Black Sea. Later you pass through areas with Mediterranean fish and finally into the big oceans of the world, the Atlantic, Pacific and Indian Ocean. Sea Life is a commercial company and has to recoup the high costs for the elaborate fish tanks, the building and the staff by the entrance fees. Therefore, the entrance fee of 17,50 € for adults (as of 2017) is not really cheap. But a visit is still worthwhile and an unforgettable experience. By the way, in the internet one can often get the entrance fee cheaper (see below).

Tour through the Sea Life Munich

After the entrance room you enter the room with the fish from the Isar. One of the most interesting aquariums follows in the next room with the Danube Delta. Waxdick, Sterhausen and Sterlet (all sturgeons), Rotfelder (carp), trout, catfish and zander cavort with other fish species in the large tank. Several times a week an interesting feeding of the fish takes place here. You can walk around the basin like in many of the Sea Life Centre’s basins and thus observe the fish from all sides. Next is the Black Sea, a fish tank with artificial waves. Written perch, lobsters, two-banded bream, sea radio and other fish can be seen here. Especially interesting for children is the so-called feel basin with non-toxic sea anomones of the species Purple Rose, into which you can stick your finger.

The tour continues into the large basin of the Mediterranean port. Here you can admire small cat sharks (up to 1 m), rays, turbot and gilthead bream. This is followed by the theme of shoals with an impressive shoal of at least 100 approximately 20 cm long dorados. The tour continues with artificial coral reefs from the tropics and the Mediterranean, where colourful clownfish and surgeonfish swim. The highlight of Sea Life is a 10-metre long channel. To the left, right and above the visitors is the largest basin with about 400,000 litres of water – the ocean basin. One has the feeling of being in a tropical ocean between the fish. You can see colourful fish like orange flame dwarf angel fish, yellow sailorless doctor fish, but also spectacular nurse sharks, which can grow up to 3 meters long. Furthermore, the ocean basin is home to the only giant turtle of Bavaria.

Note: Our visit was a few years ago, in the meantime there are more interesting attractions and animals at Sea Life Munich. 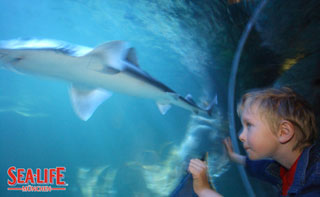 Besides the fish and sea animals there is a small cinema in Sea Life where a great film about sharks and rays was shown during our visit.

Information about the Sea Life in Munich

Opening Hours 2022 Sea Life Munich: The aquarium is open daily from 10 am to 5 pm On weekends, holidays and vacations (school holidays) the opening hours are from 10am to 6pm.

The staff at Sea Life is friendly and helpful. On Sundays and during the holiday season Sea Life can be quite crowded. It is best to go during the week if you have the choice. You can leave the Sea Life with the day ticket plus stamp on your hand and come back later (for example for feeding). Feeding is one of the highlights in Sea Life for the majority of visitors, besides the ocean basin.

Photography in Sea Life is allowed without flash. However, it is quite dark in many pools, so that not every (simple) camera can take good pictures. If you have a good camera you can take perfect pictures of sharks, the giant turtle and other fish.

Directions to Sea Life Munich: Take the subway U3 to Olympiapark. Walk about 500 meters past the BMW World in the direction of the television tower over the pedestrian bridge. Around the Olympiapark there are enough parking spaces.

Sharks and sea turtle: only during the week 14:30

More info about animals: The largest shark in the world is the whale shark (also the largest fish on earth), the most dangerous shark in the world is often drawn the bull shark. However, there are not many people killed here, but mosquitoes, the most dangerous animals on earth (more than 1 million deaths per year), are much more dangerous. On this link you will find an overview of all shark species on earth.