The most important shopping street of Munich is without doubt the pedestrian zone between the Karlsplatz (mostly called Stachus) and the Marienplatz. The eastern part (from Marienplatz towards the west) is Kaufingerstraße. The western part (from Stachus towards the east) is Neuhauser Straße. The area around the Frauenkirche, north of Kaufinger Straße, is also part of the pedestrian zone in Munich city centre. North of Marienplatz, the luxury shopping street Theatinerstraße connects Marienplatz with Odeonsplatz. All of these streets are pedestrian areas that are connected to each other. Thus the city centre of Munich has probably the largest pedestrian zones in Germany. Nowhere else in the Republic are shop rents and land prices higher than here. According to some statistics, the area around Marienplatz has the highest land prices in all of Europe, even higher than the Champs-Élysées in Paris. Nevertheless, you can still get one or two bargains in the city centre of Munich. The prices for the offered goods are not much higher than elsewhere in Germany.

The pedestrian zone of Munich begins at Stauchus (Karlsplatz) for visitors coming from the main station, which is about 300 metres away. The large fountain at the Stachus is, next to the fountain at the Marienplatz, the most famous fountain in Munich and a popular meeting place. 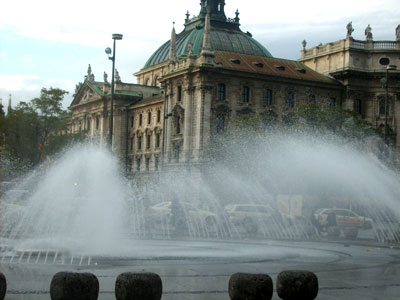 The large fountain at Karlsplatz (Stachus)

The most famous restaurant in Neuhauser Straße is the Augustiner Restaurant. In this large restaurant (former Augustiner brewery) you can enjoy excellent, middle-class Bavarian cuisine at affordable prices. Of course, you can also simply drink a cool Bavarian beer in the brewery restaurant. 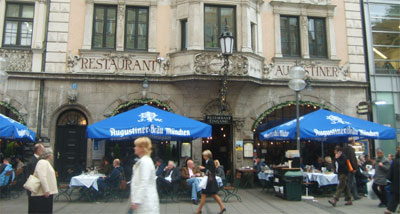 At the end of Neuhauser Straße, before it becomes Kaufingerstraße, you will find the interesting hunting and fishing museum. Apart from that you will find department stores, a large branch of the electronics store Saturn and many other shops in this area. 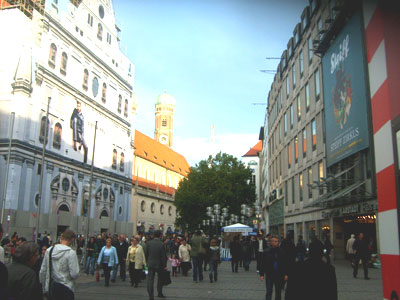 Most of the classic department stores are located in the most famous street in downtown Munich. Here you will find one of the highest land prices in Europe. Many old, local shops could not keep up in the last years. Today, Kaufingerstraße is mainly home to branches of large chains, as is the case everywhere in Germany’s pedestrian zones, e.g. C&A, Galeria Kaufhof, H&M, New Yorker etc. At the end, Kaufinger Strasse leads into Marienplatz, the centre of the city of Munich. If you take a left turn before Marienplatz, you will reach the famous Munich Frauenkirche after 50 meters.

The Munich pedestrian zone on the city map

North of Marienplatz (passing the large town hall on the left) is Theatinerstraße. Here are no big department stores, but small but nice shops and boutiques. The majority of the shops offer exclusive clothes. Many of the shops are old traditional Munich businesses. Some years ago a new shopping arcade called Fünf Höfe was built in Theatinerstraße. Here you will also find many exclusive fashion shops. At the end of Theatinerstraße you reach Odeonsplatz. Here the pedestrian zone and the city centre ends.

One of the most famous shops in downtown Munich is Dallmayr. The world-famous coffee trader runs a large, exclusive shop here with delicacies of all kinds. On the first floor is a top restaurant with corresponding prices. Whether wine, tea, cheese, pastries, chocolate, coffee, spirits or many other things: At Dallmayr, one usually finds the best of the best with a large selection. Dallmayr also operates a top-class restaurant in the building. Dallmayr Delikatessen is located in Dienerstraße (about 100 metres to the right behind the town hall).