Schloss Nymphenburg is considered one of the most important and impressive castles in Germany. The castle was built in individual stages over a long period of time. The middle section was built by architect Agostino Barelli (1664-1674) on behalf of the Wittelbach Elector Ferdinand Maria. Later, the side wings, galleries and pavilions followed (architects: Entico Zucalli and Giovanni Antonio Viscardi). The most important castle in Munich was later redesigned several times. The Nymphenburg Palace Park is one of the most worth seeing palace gardens in the world. Here you can find all visitor information.

Nymphenburg Palace from the front

In the central part of Nymphenburg Palace there is a large main hall (late rococo) with the famous huge ceiling painting „Olympic heaven of gods“. In the north and south wings are the living rooms, bedrooms, antechambers and audiences of the Bavarian rulers – many interesting pieces of furniture and paintings. Worth seeing is for example the beauty gallery with 36 pictures of beautiful Munich women in the south wing of the castle from the time of King Ludwig I of Bavaria.

Several museums are housed in the Nymphenburg Castle: In the south wing the Nymphenburg Porcelain Museum. The porcelain manufactory is still in operation and world-famous (you can buy it in the castle). In the same wing the Marstallmuseum (carriages, riding equipment). In the north wing the interesting museum for man and nature.

Detailed information about the famous castle in Munich can be found in this book.

The entrance fees to Nyphenburg Castle are variable. If one „only“ wants to enter the interior of the castle, it costs 8 €. But there are five more objects in total which cost admission: Badenburg, Pagodenburg, Magdalenklause, Amalienburg as well as the Marstallmuseum including the world-famous Nymphenburg porcelain collection. However, there is a combination ticket for all six objects for 15 Euros. Admission prices are reduced by about 1 euro. Children under 18 years of age pay no admission to Nymphenburg Palace. For what one gets to see, the entrance fees are cheap!  Some of the garden palaces are not open in winter. Therefore, the entrance fee with the combination ticket is cheaper in winter (12 Euro). The castle park can of course be visited free of charge all year round. All entrance fees are from the year 2020. will find that the prices are ok, you get a lot to see.

The castle can be visited every day (no rest day). Only some holidays are closed (for example Christmas, New Year, Carnival and New Year’s Eve etc.). However, the buildings in Nyphenburger Park are closed in winter (about mid-October to the end of March). The opening hours are from 9 to 18 o’clock, in winter 10 to 16 o’clock. You can rent an audio guide for a small fee (worthwhile).

It is best to take tram 17 and get off at the stop „Schloss Nymphenburg“: from Munich central station every 10 minutes, travel time just under 20 minutes.

The Nymphenburg Palace Park is one of the largest and most important parks in Bavaria. A complex of gigantic size with the 1.5 km long central canal (Nymphenburg Canal) as its main axis. Many marble figures representing water gods. Star-shaped avenues on both sides of the canal.

The long canal in the castle garden

The castle park was first laid out by the gardener Dominique Girard (commissioned by Elector Max Emanuel). However, the actual garden architect is Friedrich Ludwig von Sckell (1804), who also designed the English Garden. The castle park is very popular with the people of Munich for walking. Many fountains, water installations and small castles in the mile-long area. In the castle park is the very interesting Munich Botanical Garden.

Impressive is the kilometre-long canal in front and behind the castle. In the castle park there are some smaller buildings which are also worth a visit. In the Amalienburg the round hall of mirrors as the centre of the hunting lodge is impressive. The Badenburg is a late baroque bath house. From the steps of the temple of Apollo (picture below) you have a great view on the big lake in the park. 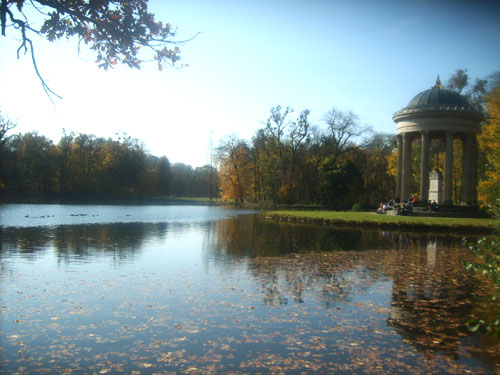 Above all, one should also visit the more remote parts of the park. In the extended meadows and forests one can hardly imagine being in the middle of Munich. The Nymphenburg Castle Park is a protected landscape area and home to some protected animal and plant species. Cycling and dogs without a leash are strictly prohibited.

For many visitors, however, the many fountains and stone figures are also the reason for a visit to the castle park. They are especially amazed by the cascade in the rear part of the park of Nymphenburg Palace.

Part of the famous water games in the Nymphenburg Palace Park