An inn in Bavaria is roughly what a restaurant is in other parts of Germany. It serves food and drinks. But one does not necessarily have to eat, the pub is not a restaurant. One can also simply drink something, most of the times, in Munich, this is of course beer. Most of the inns in Munich belong to a brewery or work directly together with a certain brewery. That’s why the pub usually only serves beer from a Munich brewery. The big Munich breweries – Augustiner, Hacker Pschorr, Paulaner, Spaten, Löwenbräu and Hofbräu – each run hundreds of inns, pubs and restaurants in Munich. Quite a few Munich residents only go to inns that serve their favorite beer.

Unfortunately, the number of traditional inns in Munich is also getting smaller and smaller. The majority of the public is over 50 years old. The young people of Munich, like everywhere else in the western world, prefer to go to modern discos, cocktail bars or restaurants with foreign cuisine. However, more traditional restaurants have survived in Munich than elsewhere in Germany, mainly because of tourism. This also and especially applies to the city centre.

In some large inns there is still traditional live music every day in the evening. In the really big ones also during the day. In the Hofbräuhaus even during the week.

Drinks in the pub

A high proportion of the guests in a pub in Munich drink beer. There are almost always more men than women present. The most popular non-alcoholic drinks are coffee, Spezi and apple juice spritzer. Beer is available in bulk (1 litre) and nowadays in many inns also as half a litre (0.5 litres). Predominantly there is light beer. If you want half a litre you order „a pale“, if you want one litre you order „a measure“. Weißbier (called Weizenbier in other parts of Germany) is the second most popular beer in a Munich pub. Every large brewery in Munich also produces one Weißbier. This is available almost only as 0.5 litres. However, you can also order a Maß Weißbier. There is also dark beer and almost always a dark wheat beer. People like to drink a lot in the pub, but being totally drunk is not part of Bavarian culture. However, a boisterous, alcoholic and soulful atmosphere with singing is common.

Dining in the inn

There are almost always soups and the typical Bavarian main courses – the roast pork with dumpling is rarely missing from the menu. Weißwürste should be eaten before 12 o’clock in the morning. Nowadays, as a tourist (not as a Bavarian) you can order Weißwürst in the afternoon or evening. Also there is almost always a snack. These are cold snacks. A snack often consists of sausage (like Leberkäs) or cheese with bread. 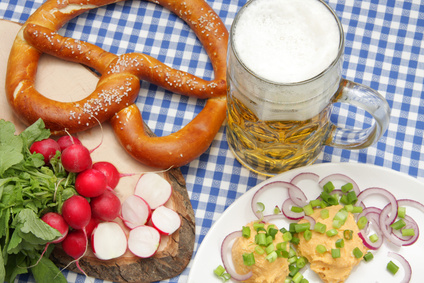 Here is a list of 10 interesting, traditional inns in Munich. All of them are located in the city centre or are easily accessible by underground. Some are large, well-known beer cellars and / or the official brewery restaurants of Munich’s major breweries. Some of these restaurants are very large (several thousand seats).

Hofbräuhaus: probably the most famous pub in the world. The Hofbrauhaus is located directly in the city centre, within 10 minutes walking distance from Marienplatz (U3, U6, all S-Bahn lines). Despite its fame not too expensive. It is a very large restaurant.

Löwenbräukeller: One of the biggest restaurants in Munich. Beautiful, huge building on Stiglmaierplatz. There is always something going on in this wirtshaus, live music every day, huge beer garden. Many rooms and a very large cellar hall for events (e.g. celebrations, congresses). Directions: U1 (Stiglmaierplatz).

Paulanerkeller at Nockerberg: burnt down and rebuilt in 1999. Every year in spring the famous Starkbierfest am Nockerberg takes place here (be careful, the beer is very strong). Good food and great atmosphere. Subway 1 and 2 Kolumbusplatz and then up the Nockerberg into the Hochstraße.

Weißes Brauhaus: Only 5 minutes walk from Marienplatz. In this pub you can get the famous Schneider Weiße (wheat beer or wheat beer) and good food. For the city centre rather reasonable prices. Large portions. Address: In Tal 12, not far from the Hofbräuhaus.

Paulaner Bräuhaus: Good food such as meat and game with Paulaner beer. Since not directly in the city centre not so many tourists. U3, U6 Goetheplatz. Address: Kapuzinerplatz 5

Augustiner in the centre: After the Hofbräuhaus probably the most famous pub in Munich. Several large rooms – famous is the beautiful Shell Room. Despite its size, it is always full, even during the day. Excellent Bavarian cuisine. Also tables directly in the pedestrian zone. Neuhauser Staße 27 (Munich’s main pedestrian zone). Directions: Stauchus ( Karlsplatz) with all S-Bahn and several U-Bahn lines only 100 meters away.

Hofbräukeller: Haidhausen district, about 30 minutes walk from the centre. Traditional restaurant with one of the most beautiful beer gardens in Munich. Large menu. Perhaps even more Munich-like than elsewhere – fewer tourists. U4, U5 Max-Weber-Platz, address: Innere Wiener Straße 19, near the Bavarian Parliament.

Andechser am Dom: Andechs is about 20 km outside of Munich and very famous for the famous dark Andechser beer. If you do not have time to drive to Andechs (it is worth it), you can try the beer here. Also good, traditional cuisine. Weinstraße 7a, near Marienplatz.