On the city limits of Munich lies the Forstenried Wildlife Park, an interesting fenced forest area with wild animals. In the almost 20 square kilometres (!) large area it is possible to observe native wild animals in their natural environment. You can enter the park for free at several places. At the entrance you cross a wide-meshed fence, which only humans but no wild animals can cross. Entrance to the deer park Forstenried is free of charge. To observe the animals, the early morning or early evening (twilight) is recommended. Since the area is quite large, it is not easy to find the animals. On a Sunday afternoon in summer you have the worst chances. The more visitors there are in the park, the more shy the game is. You should definitely have binoculars with you. 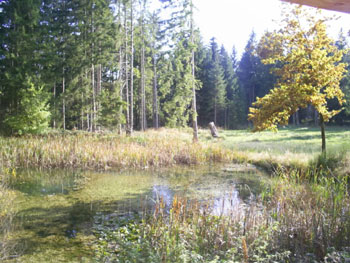 In the park live almost 100 wild boars (wild boar), about 40 roe deer and about 100 stags (in about equal numbers the two deer species red deer and fallow deer). There are also hares, foxes, polecats and even badgers. Several covered observation points have been set up in the game park. There you have the best chances to see the animals. Binoculars are recommended.

Several, partly tarred, paths lead through the park. Therefore the bicycle is the ideal means of transport, especially since the zoo has a diameter of up to 6 km. On beautiful days on weekends in summer, thousands of Munich’s citizens are on the move by bicycle in the park near Forstenried. The Forstenrieder Park is one of the most popular destinations for excursions for the citizens of Munich.

How to get there: The easiest way to reach the park by public transport is from the S-Bahn stop Buchenhain (S7), unfortunately one stop outside the interior. Thus, the journey from the city centre costs 5.60 € one way (as of 2017). By car you can easily reach the park (enough parking spaces available). By bike you can go directly from Munich to the Wildpark. It is not far from the southern city limits of Munich. The fastest way to get to the Forstenried Wildpark Munich by bike is on the hiking trail described below.

Tip: Very nice is the hike from the terminus of the U3 (Fürstenried West) to the Buchenhain stop described above. The hike is about 10 km long. It leads almost exclusively through forest, about half the way through the game park. The first 2-3 km are a tree nature trail. The path is tarred all the way through, so it is also easy to cycle. This is one of the most beautiful walks in and around Munich.

Important rules in the Forstenrieder Wildpark: No cars or motorbikes, no smoking (because of forest fire), no leaving garbage behind, dogs are not allowed to run free. Wildlife resting areas have been set up, which are not to be entered.  In general you should keep as quiet as possible. Among other things the wild pigs can be aggressive, so it is better to keep a certain distance.

Opening hours:  You can visit the Forstenrieder Park at any time of day or night. Although the park is surrounded by a fence, the entrances are not locked at night. Quite a few animal lovers visit the game park already at dusk, in summer around 5 o’clock in the morning.