The Frauenkirche is the most famous church and perhaps the most important landmark of Munich. The building is a gothic brick building, which was completed in 1488 after 20 years of construction. The interior of the Frauenkirche is of enormous size: standing upright, the church is said to be able to accommodate more than 20,000 people. It has two identical towers, each 98 metres high. They tower above the centre of Munich: according to a decree by referendum, no building higher than the Frauenkirche has been allowed to be built in the inner area of Munich for several years. The church in the heart of Munich has been a bishop’s church since 1821. The full name of the Frauenkirche is: „Church of our dear women“. 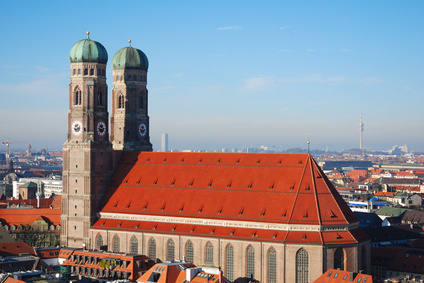 The church looks quite simple from the inside and outside. The southern tower can be climbed. From the top you have an excellent view over Munich. In good weather one can clearly see the individual mountains of the Alps.

Interesting is the devil’s foot step. It is a footprint in the ground at the entrance of the Frauenkirche. From here one has the impression that the church has no windows.

One of the two towers of the Frauenkirche can be climbed. From the top, one has a great view over the whole of Munich, in good weather one can also see the Alps. The Frauenkirche is a cathedral, thus the seat of a bishop. In total, the Frauenkirche has 10 bells, 7 of them are in the south tower that is accessible for visitors. The biggest bell of the Frauenkirche named Susanne has a weight of eight tons. The four organs in the Frauenkirche Munich are new (from 1981 to 1994). The bishop’s crypt is also interesting. Several Bavarian kings and cardinals are buried here.

The performances of the famous cathedral choir and organ concerts in the Frauenkirche are also recommendable. 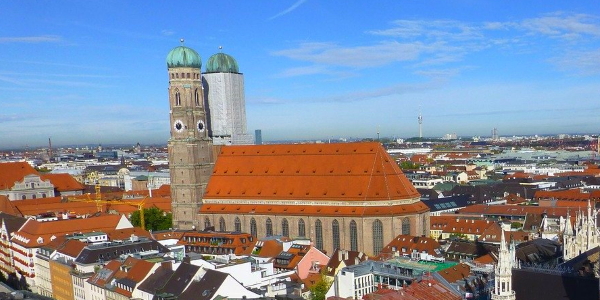 The Frauenkirche can be reached on foot in less than 5 minutes from the centre of Munich, Marienplatz (all S-Bahn lines and the U3 and U6 underground lines). Not much further (about 10 minutes) is the stop Karlsplatz, also called Stachus (S1-S8 as well as U4 and U5).

The Frauenkirche is open every day from 7 am. The church is closed in the evening between 18 and 20 o’clock. During a church service you can of course not visit the church. The tower can be climbed from April to October from 10 to 17 o’clock (not Sundays).

Link tip: The church Sagrada Famila in Barcelona by Gaudi