The English Garden in Munich is the largest city park in the world and probably the most famous park in Germany next to the Tiergarten in Berlin. It is about 230 years old. It was designed by the architect Friedrich von Sckell. The actual size of the English Garden is 3.8 square kilometers. Including the adjacent green spaces and protected areas in the north, however, it is many times larger.

If one is in the huge English Garden, one does not have the feeling to be in a city of millions, although the park is very centrally located in Munich. Nude bathing is tolerated in many places in the English Garden. Here Munich shows its liberal side. Especially in the south of the park there are many „naked people“ in the summer, as they say in Bavaria.

In the south of the park is the Haus der Kunst, one of the many important art museums in Munich. In the English Garden are many artificially created streams and lakes. 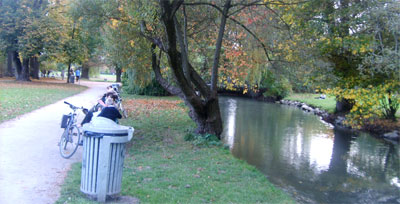 The Eisbach flows from the south into the city park. At the southern entrance you can see daily whitewater surfers with many spectators. 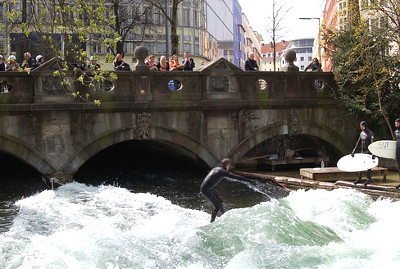 If one enters the park from the south, one reaches after a few 100 metres the first sight, the Japanese Tea House. It was built for the Olympic Games in Munich 1972. Unfortunately, it is mostly closed, but sometimes Japanese tea ceremonies lasting for hours take place, in which everybody can participate. The best chances are on Sunday afternoon.

The Monopteros is a rotunda that stands on a hill on 10 columns. Many young people sit on the steps in good weather. Until a few years ago the Monopteros was a meeting place for punks, stoners, guitar players and homeless people. But this has diminished a little bit. Behind the building there is the biggest meadow in the English Garden. 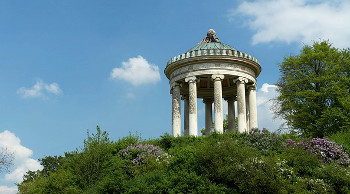 The Chinese tower is made of high wooden tower in a Far Eastern architectural style.  The tower is considered the most famous sight in the large city park. Around it you will find one of the biggest beer gardens in Munich. It has about 7.000 seats and belongs to the most famous beer gardens at all. The food in the beer garden at the Chinese Tower is good and Bavarian (medium prices). North of the restaurant is an old, historic children’s carousel from 1912, which has not been changed or modernized since then. You feel like being transported back to old movies from the 20s.

How to get there: The nearest subway is Giselastraße (U3 and U6). From there it is about 20 minutes on foot. It is better to take the bus. These go here through the English Garden on a street that may only be used by buses (lines 54 and 154, name of the stop is simply Chinese Tower). 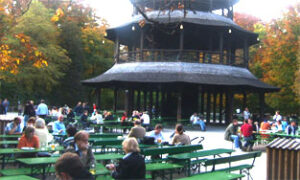 Another beer garden further north in the English Garden. It lies directly on the Kleinhesseloher See. 2500 seats (like at the Chinesicher Turm classic beer table sets). Here one drinks and dines in a more noble and exclusive way than at the Chinese Tower. It is a showcase beer garden in Munich, e.g. for business friends. The nearest subway is the U6 stop Dietlindenstraße (15 minutes walk).

This is the largest lake in the English Garden. You can rent pedal boats and rowing boats. Prices depending on the number of persons (2 persons 5€, 3 persons 6€, 4 persons 8€, 5 Pes. 10€ for half an hour in 2009). In the lake there are islands with many birds, which can only be seen from close by with the rental boats. The boat rental is open in summer until 21 o’clock. The lake described above is located on the Kleinhesseloher See. 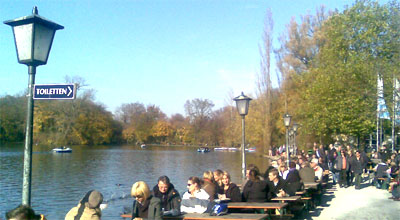