The Marienplatz has been the central square of Munich for 800 years. It is said that the most expensive properties in Europe are currently located around the square. The Marienplatz is also an important underground and suburban railway junction. It is the starting point of the wide pedestrian zone (Kaufingerstraße) with many department stores. The large building on Marienplatz is the New City Hall, which was built around 1900. In the tower of the town hall there is the famous carillon with automatic dancing figures that dance the so-called „Schäfflertanz“. The carillon (in summer 4 times a day) is world famous. 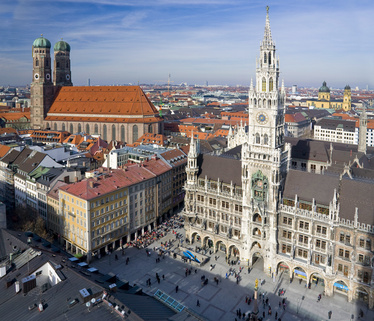 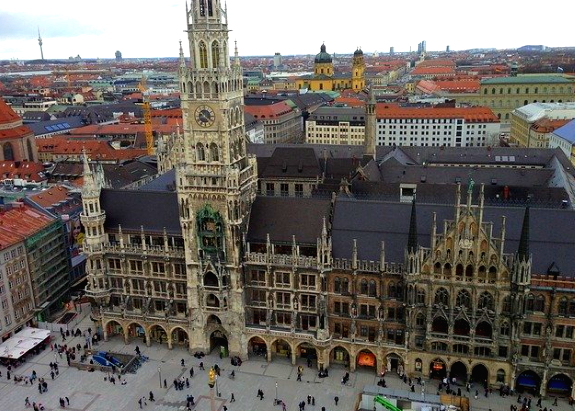 On the northern side of Marienplatz is the large New City Hall of Munich. As Munich grew strongly in the 19th century, the Old City Hall on the east side of Marienplatz became too small. Around 1860 it was decided to build a new building. The architect of the building in neo-Gothic style was the Austrian student of architecture Georg von Hauberisser, who was only 25 years old at the time. In 1867 the construction of the New Town Hall on Marienplatz was started and was not completed until about 30 years later. It is one of the most beautiful town halls in Germany. 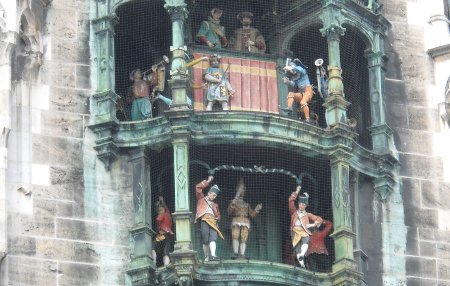 A tourist magnet is the carillon in the Munich City Hall, which is a great attraction especially for tourists from America and Japan. The carillon with 43 bells and the figures rotating in a circle takes place 4 times a day in summer (times: 11 am, 12 pm, 5 pm and 9 pm). The upper level of the rotating figures represents a ducal wedding from 1568 (William V and Renate of Lorraine). The lower level illustrates the so-called Schäfflertanz, a very famous Bavarian dance that goes back to the coopers (barrel makers) in the 19th century. Sometimes more than 1000 people on Marienplatz marvel at the carillon at the front of the Munich City Hall. 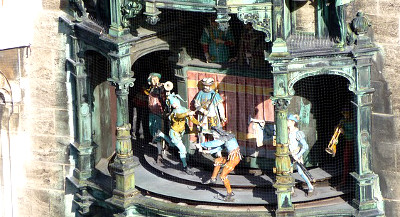 Map of the Marienplatz in Munich on the map

Directly opposite the town hall is the restaurant and café „Am Marienplatz“. The famous Bavarian veal sausage is said to have been invented here in 1857. In the restaurant you can taste delicious Weißwurst with sweet mustard, a pretzel and one or more white beers. Real Munich residents eat the Weißwurst only in the morning before noon, but tourists can also eat it in the afternoon and evening.

A good possibility to eat cheap Bavarian food is directly at Marienplatz. In the „Donisl„, according to the motto of the restaurant „Munich does not have to be expensive“, no main meal costs more than 8,35 € (2011). The menu is very large. Even duck is available for the low price.  On the menu you will find almost all known Bavarian dishes. Often there is Bavarian live music on the upper floor. Current info 2014: Unfortunately, the Donisl no longer exists, but it will reopen in 2015 after extensive renovation. Current Info 2017: The Donisl is reopened. The kitchen is very good, but the prices are a bit higher than a few years ago. 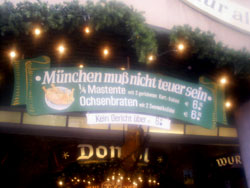 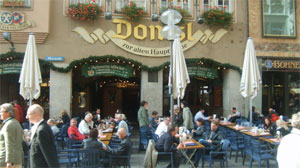 On the eastern side of Marienplatz is the Old Town Hall of Munich with the Old Town Hall Tower. Inside is the Toy Museum. For example the dolls, teddy bears and trains of the private collection are interesting.

Other buildings at Marienplatz Munich

You can rent a rickshaw with driver at the Marienplatz. Similar to a taxi, the rickshaw driver takes his passengers to other sights in Munich. A rickshaw ride to the Hofbräuhaus about 500 meters away is especially popular. You should negotiate the fare in advance.

Directions to Marienplatz Munich: All S-Bahn lines, U-Bahn U3 and U6. In addition, bus line 52 to Munich Zoo leaves directly from Marienplatz.  It is one of the very few bus lines in the centre of Munich.