Murnau am Staffelsee is a market town with about 12,000 inhabitants. Murnau is located about 70 km south of Munich in the foothills of the Alps on the way from Munich to Garmisch-Partenkirchen. The market has a lot to offer for visitors: On the one hand Murnau is situated at the Staffelsee, one of the most beautiful lakes in Upper Bavaria. On the other hand, directly south of Murnau is the nature reserve Murnauer Moos, the largest moor in Germany. In the village itself there are some interesting buildings like the castle or the Münter Haus, where painters of the Blaue Reiter lived for several years. 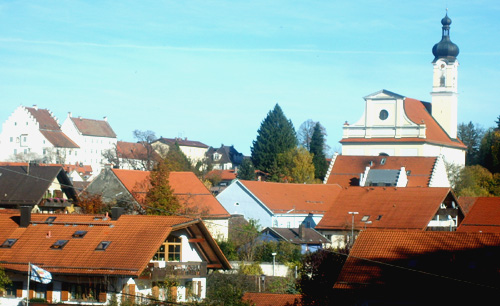 Unfortunately, the station is located a little outside, but you can reach the centre in about 10-15 minutes on foot. The most important sight in Murnau is the Murnau Castle – also known as the rare Murnau Castle. In it is the castle museum. In the museum everybody finds what he is interested in: There is information and exhibits about the castle, the nature around Murnau (Murnauer Moor, Alps, Staffelsee) and especially about the Blaue Reiter (a large collection of pictures by Gabriele Münter, Wassily Kandinsky and other members of the artist group Blaue Reiter).

15 minutes on foot outside the centre of the municipality of Murnach lies the sight of the Münter Haus (see picture below). Gabrielle Münter lived here for decades and died in 1962. Several times she was visited for months by Kandindky and other artists, especially between 1909-1920. The house can be visited inside every afternoon (except Monday). 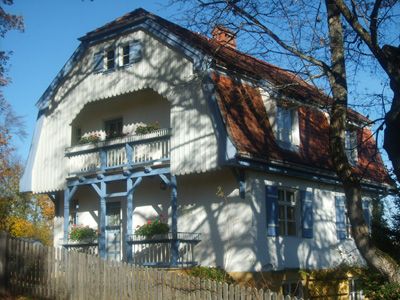 The Murnauer Moos nature reserve is the largest preserved moor in Europe. The approximately 5 km long and 6 km wide bog area is located directly southwest of the village Murnach and about 1 km south of the Staffelsee. Many very rare plants and animals like corncrake (bird) or adder (snake) can be found in the moor. The Moos-Rundweg is an easy and flat hike in the Murnauer Moos, which begins in a southern suburb of Murnau. The approximately 3-hour circular walk is one of the most interesting in the Upper Bavarian Alpine foothills. 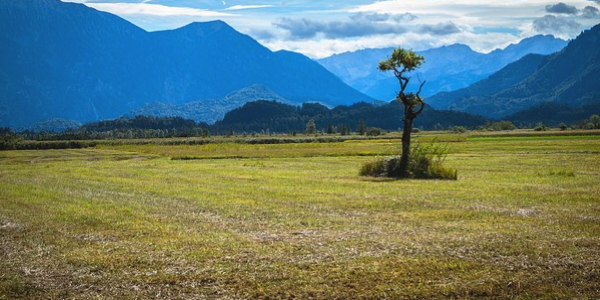 The idyllically situated Staffelsee is a popular destination for excursions. The lake shore is, seen from the village Murnau, on the other side from the railway station. The lake is about 7 square kilometres in size. You have to walk about 20 km to go around it. There are seven islands in the Staffelsee – by far the largest is Wörth. This island is even inhabited (5 inhabitants). 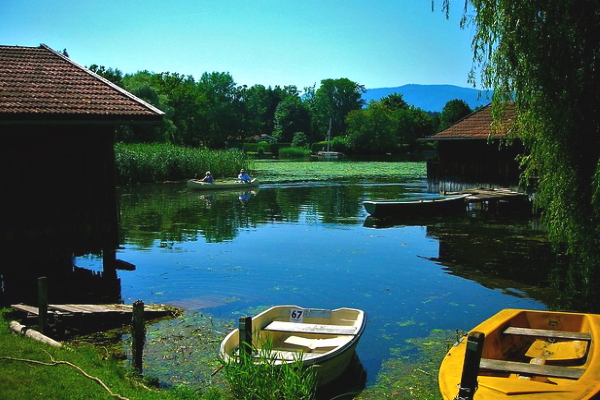 In summer, excursion boats run on the Staffelsee between Murnau, Seehausen and Uffing, to the islands unfortunately only by arrangement in groups. One of the highlights for many visitors of Murnau is the well developed and signposted circular path around the Staffelsee. The path is quite easy to walk, but with 21 km it is strenuous. But you can also walk only the 13 km to Uffing and take the boat or a train back. The village of Uffing is located on the train route from Munich to Murau.

During the day there is a train from Munich at least every hour. The travel time is about one hour. The Bayern-Ticket is valid on almost all trains. Almost all trains continue to Garmisch-Partenkirchen (30 min). A branch line runs from Murnach to Oberammergau.