The Oktoberfest (the name in Munich is Wiesn) is the largest folk festival in the world. It has been held on the Theresienwiese in the centre of Munich for about 200 years. The number of visitors is currently about 6 million per year. The total turnover is almost one billion Euro. This makes the Wiesn one of the most important seasonal employers in Germany. Many thousands of people have a mostly well-paid job during the Oktoberfest.

Best time to visit / Overcrowding: Since the area is not even 0.5 km², the fairground is often completely overcrowded. Therefore, it is better to visit the biggest party in the world during the week during the day – at least if you want to see the beer tents from inside. From about 6 pm on weekdays and from 1 pm on Saturday and Sunday the festival tents are usually closed due to overcrowding. The tent capacity is „only“ about 80,000 places in total. 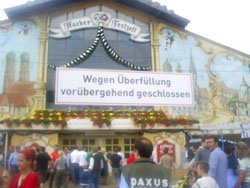 History: The first Oktoberfest took place in October 1810. It was the wedding celebration of the later King Ludwig I of Bavaria, who married Princess Therese (hence the name Theresienwiese). In the course of the years the festival grew bigger and bigger, soon showmen were added. The saddest event was the bomb attack in 1980, in which 13 people died. The assassin was probably a Bavarian right-wing extremist who himself died in the bombing.

Dates: Since the weather is worse in October, the festival was moved to September over 100 years ago. It always starts on a Saturday at 12 noon, lasts between 15 and 17 days and ends at the beginning of October. If the holiday of German Unity Day (October 3rd) is a Monday or Tuesday, the festival ends on that day. In other years it continues until the first Sunday in October.

Opening hours: For noise protection and security reasons the big party ends early. The bar closes daily at about 22:30. Some smaller tents serve drinks longer (the wine tent and the Käfers Wiesnschenke until shortly after midnight). Rides and other things end at 23:30 at the latest on weekdays and at 24:00 on weekends. In the morning we start early: at 10 am during the week, Saturday and Sunday already at 9 am.

Tip: At the Prater in Vienna there is party all year round: More here

Beer tents: The six large breweries in Munich have a total of twelve large beer tents. Paulaner has three, Hofbräu one tent, the other four breweries each have two tents. 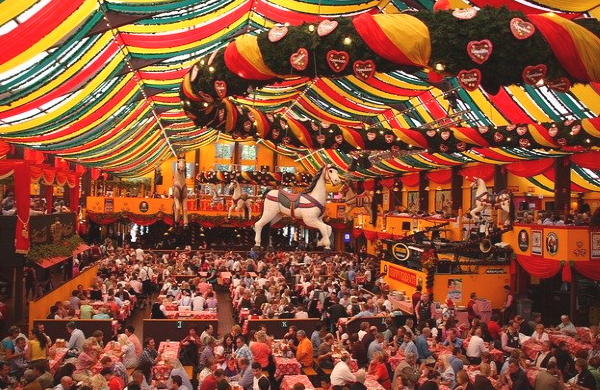 In order of size are the large marquees (in brackets the brewery): Paulanerfesthalle, Hackerfestzelt, Augustinerbräu, Schottenhammel (Spaten), Braurösl (Hacker-Pschorr), Armbrustschützenzelt (Paulaner), Ochsenbraterei (Spaten), Löwenbräu-Festzelt, Schützenfestzelt (Löwenbräu), Hofbräuzelt, Fischer-Vroni (Augustiner), Hippodrom (Löwenbräu). These tents have a total of about 70,000 seats. Almost all tents have beer gardens with many more 1,000 seats.

In addition, there are many smaller tents, the most famous are the wine tent, the chicken and duck roastery Wildmoser and Hochreiter’s Haxnbraterei.

Rides and showmen: The Wiesn, as the most important amusement park in the world, has over 100 attractions of this kind to offer. Many have a long tradition, every year there are a few new ones. 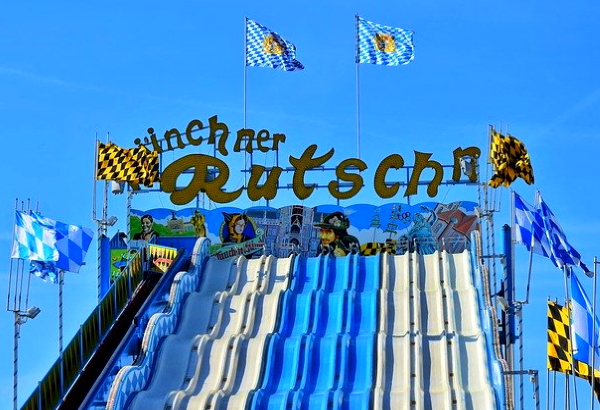 Well-known rides are the over 60-metre high Power Tower, roller coasters and the like such as the Euro Star, Star World, Ferris wheel and the Olympic loop. Of course there are also the classics: ghost trains, shooting galleries, can throwing, ship swings and much more. Every year there is something new.

Food: In all marquees there are also smaller and larger meals. Mostly there are Bavarian classics and Oktoberfest celebrities such as ox on a spit, half chicken, half duck and plugfish. As snacks there are Weißwürste, Schweinsbratwurst (pork sausages), Schmalzbrote, radishes (radish or radishes) with salt, giant pretzels. In the tents the food has become very expensive. Outside the tents it is a bit cheaper at the many stalls and snack bars. Here you can get fish sandwiches, hamburgers, hot dogs and much more. Very popular are also the sweet stands with roasted almonds, cotton candy etc. In the last few years many stands with non-Bavarian food have been added (kebab, gyros, Thai, former Yugoslavian etc.) 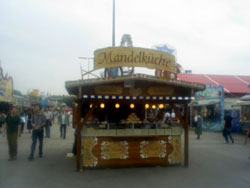 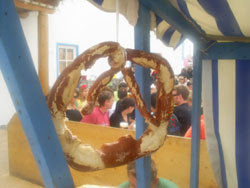 Prices: Unfortunately, the Oktoberfest is expensive and prices continue to rise from year to year. Since the number of visitors and the turnover continues to increase due to the popularity and the area of the Theresienwiese is not growing, there is hardly any price pressure. Therefore the prices have now reached a level which is about 30-50% higher than at comparable events. The beer price is still within limits: The measure (1 litre) of beer costs around 11 Euros in the big tents in 2010. Food has become extremely expensive, especially in the tents. You can hardly get full below 15 euros. 20€ for a good meat dish with side dishes is more realistic. If you run out of money: Several cash machines are set up at the Oktoberfest. Smoking has been prohibited in the tents for several years.

Tapping: The Oktoberfest traditionally begins on a Saturday at 12 noon. The first barrel is tapped by the Mayor of Munich (currently Dieter Reiter, SPD) at this time with the words „o’zapft is“. (it is tapped) tapped.

Clothing: Many Bavarians and increasingly also tourists from overseas come with Lederhosen or Dirtl. Very popular are also in recent years everywhere on the Oktoberfest buyable „Wieshüte“ and T-shirts, which are mostly related to the theme beer.

Moving in of the landlords: The first procession starts on the opening day at 10:30 a.m. From the Munich city centre the marquee landlords move to the Theresienwiese. Bands, brewery carts, carriages and so on. 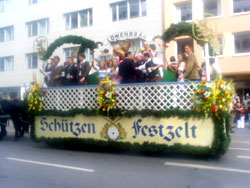