The Theatiner Church is a colossal looking ochre-coloured church on Odeonsplatz in Munich. The Theatiner Church was built from 1663-1692 (Baroque) by Agostini Barelli and later by Enrico Zucelli. The façade is from the period 1765-1768 by Francois Curvilles (Rococo). It was the first baroque church in Bavaria and is one of the very few in Germany. Just like the Theatiner Churches, the neighbouring Feldherrnhalle was built according to the Italian model, so that the southern part of Odeonsplatz, which is for many connoisseurs a „piece of Italy in Munich“. 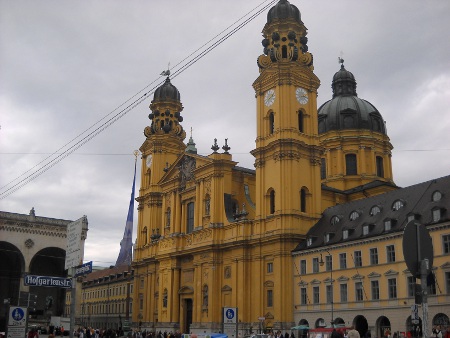 The actual, official name of the Theatine Church is St. Kajetan. It is a Catholic church of the Theatine Order, hence the common unofficial name. The two towers and the big, approximately 70 metres high dome in the background make the Theatinerkirche, beside the Frauenkirche, the most impressive church building in the centre of Munich. During the Second World War, the church was partially destroyed, but was then rebuilt largely true to the original.

Interesting things in the Theatiner Church

– the tomb of the Wittelsbach kings, princes and electors, including Emperor Charles XII, King Otto of Greece, Max I (admission in 2012 2 euros). In total, about 50 important Wittelsbach dynasties have found their last resting place here. The Theatinerkirche was the court church of the Wittelsbachs. The prince’s crypt is only accessible to the public in the summer months.

– Picture: „Mary on the throne with saints at her feet“ by Caspar de Crayer 1646

– the enormous high altar from the 18th century. 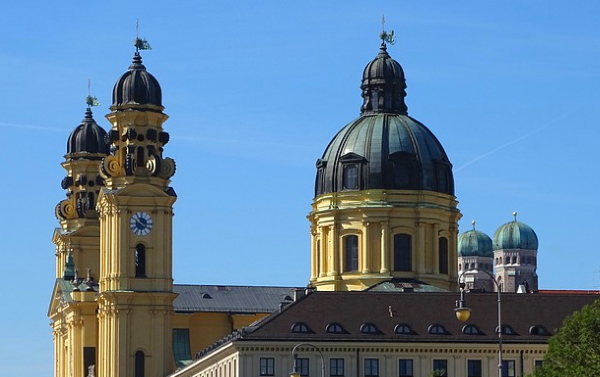 Subway: Lines U3, U4, U5, U6 stop Odeonsplatz. Parking around Odeonsplatz is almost impossible. It is better to come by subway. The museum bus line 100 also stops in the immediate vicinity.

Like most of the important Catholic churches in Bavaria, the Theatinerkirche is open every day of the week – usually from 6 a.m. to 7:30 p.m. During the service, of course, you should only enter the church interior if you want to participate in the entire service.