The wildlife park in Poing is a popular excursion destination for Munich’s urban population. Especially families with children and animal lovers come by the thousands on beautiful days to the nice zoo a few kilometers outside of Munich. Who has the choice should come on a weekday if possible. Then there is much less action in the Wildpark Poing.

On the very large area of the zoo in Poing there are mainly native animals to see. The enclosures are large, there is a lot of space between the animals, and there are even small woods including a forest nature trail in the fenced area of the Poing Game Park.

For many visitors, the highlight of the game park is the bird of prey show, although this only takes place in the warmer seasons. The bears have the most beautiful enclosure. A few years ago a new, huge, very natural area was built for the brown bears from Sweden. Personally I liked the storks very much. You can watch the black storks and the white storks from a few meters distance without a fence. Great is also the gigantic picnic area and the big playgrounds for the children. All in all, the zoo is very family-friendly and especially child-friendly. The majority of the zoo’s visitors are families. If you want to see the animals in detail, you should bring binoculars.

Although the zoo is privately run, the entrance fees are affordable. However, they have increased significantly in recent years. Adults pay (May 2020) 11,50€ entrance fee, for children between 3 and 14 years the entrance fee is 7,50€. Babies and toddlers under 3 years have free admission. The reduced entrance fee of 10,00 € is for example for pupils, students and pensioners. Disabled people pay 7,50 Euro admission to the Wildpark near Munich. There is an annual ticket for 50 Euro (adults) and 30 Euro (children). There are also discounts for groups and classes (school and also kindergarten).

In winter, Poing Zoo is open daily from 9 am to 4 pm, in summer (April to November) the opening hours are from 9 am to 5 pm. These times are valid for admission. You can also stay a little longer in the dark and simply leave the game park through a turnstile. 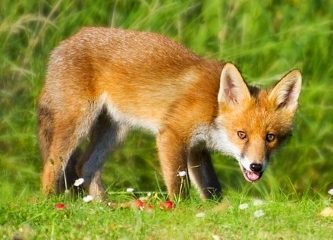 Bird of Prey Show at Poing Wildlife Park: The well-known bird of prey show in Poing features falcons, eagles and owls. This show is really worthwhile. times: To our knowledge the show with the big birds of prey in the animal park only takes place in summer (April to October) twice a day (10:30 on weekdays or 11 am on weekends and daily at 3 pm). Duration of the bird of prey show: a good half hour. On Friday, the birds in the Poing Game Park have a day off (information available in early 2017).

News Game Park Poing: At the beginning of 2017 the wild boars have given birth to young (so-called freshmen). Also popular are the young donkey Leopold and the new raccoons including offspring. Since 2016 there is a great exercise playground for children.

Directions to the game park Poing

Arrival by train (S-Bahn Munich): The best way to get to the zoo near Munich is by S-Bahn. The S-Bahn line 6 direction Erding stops in Poing (dark green line on the map). Turn right and walk along the tracks to the east (seen from Munich out of town) through the town of Poing. Soon you will see signs indicating the way to the Wildpark. In total you walk about 1.5 km. The S-Bahn trains run several times per hour from Munich during the day.

How to get there by car: The animal park Poing is in the east of the village Poing. You can hardly miss it. On sunny days at the weekend one has the impression that there are more cars on the parking place of the zoo than in the whole place Poing. The game park is well signposted in the surroundings.

Those who want to hike in the area around Poing can get a good map at Amazon for a few Euros. A pair of binoculars for observing animals is useful.