The Olympic Tower was built as early as 1965-1968, a few years before the rest of the Olympic Park. It is 290 meters high. At the end of the 1960s, the lift in the tower was one of the fastest lifts in the world. It takes visitors to a viewing platform at a height of about 190 metres in just 30 seconds. There is also a revolving restaurant here (reservations are recommended in „Restaurant 181“). One turn takes about 50 minutes. From the television tower you have a very good view of the Olympiapark and the whole of Munich. In good weather you can see clearly up to the Alps. 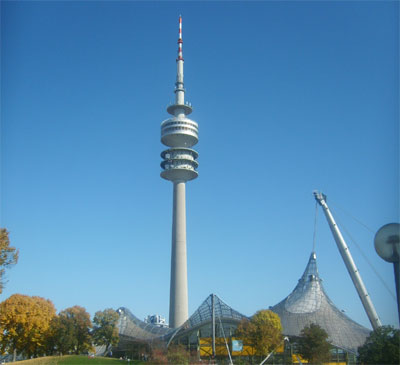 The television tower was built by the city of Munich and the former German Federal Post Office. It is mainly used for television and radio broadcasts and has become one of Munich’s most important landmarks. The tower houses a small museum about the construction of the Olympic Tower.

The speed of the two very fast lifts for visitors to the Munich Olympic Tower is about 25 km/h. There is also a slower service elevator. The viewing platforms and the revolving restaurant in the television tower are about 180-190 meters high. In the long history of the Olympic Tower, more than 60 million people have been up there. There is also a non-public accessible staircase (also for emergencies) with over 1,200 steps. Above the visitor platforms are mainly the antennas for terrestrial digital television (DVB-T), for example. Since the conversion to the new digital television in 2005, these antennas are slightly higher than before. In 2017, the switchover to the brand new DVB-T2 (new digital television with more channels and in HD) was completed.

Because of the new antennas, the Munich Olympic Tower is now even more than 291 meters high. With this height, it is now only about 25th in the list of the highest buildings in Germany. Many other television towers, transmission masts and chimneys (e.g. of coal-fired power stations) and also some skyscrapers in Frankfurt have overtaken the Olympic Tower Munich over the decades. The tower has a total weight of over 50,000 tons. In Bavaria, the tower in Munich is the second tallest building after the approximately one meter higher television tower in Nuremberg.

Even much higher than the Olympic Tower in Munich is the Berlin television tower. It is the highest building in Germany for several decades. The Alexanderplatz television tower is located directly in Berlin Middle.

The fare for the lift to the viewing platform is 13 € for adults, reduced 10 € (prices from 2023). There are also cheaper tickets for families, the so-called family tickets: parents with their own children up to 16 years pay a maximum of 29.50 €. Children under the age of 6 do not have to pay for admission to the Olympic Tower. The revolving restaurant „Restaurant 181“ is not quite cheap, but you probably won’t find such a great view anywhere else in Munich. A high-quality 3-course menu costs a good 40 euros, the price for a 5-course menu is just over 60 euros (opening hours of the restaurant in the TV tower Mo to Fr from 7 pm). Those who have already been to the nearby Sea Life (aquarium) will receive a Euro reduction on the entrance fee to the Olympic Tower upon presentation of their ticket.

With the City-Tour-Card tourists get a reduced entrance fee in the television tower.

You can go up the tower every day from 9 to 23:30. The last ride down is around midnight. The opening hours in the late evening make sense. Munich at night from above is also interesting.

Public transport: The best way is by underground number 3 stop Olympiazentrum. From there it is a 10 minute walk to the television tower. The stop Petuelring (subway) and tram (tram) 27 is a little further away. If you are travelling with the U1, you can get off at Georg-Brauchle-Ring and walk for about 20 minutes (fast arrival from the main station, but long walk). The Munich TV tower is easy to find from all stops, because you can see it from a long distance.

Sightseeing tours: The Olympic grounds with the Olympic Tower are also an important stop of the recommendable Hop-On/Hop-Off city tours with buses (double-decker buses open at the top), which can be booked on the Internet.   >>> More Information

Parking: There are usually enough parking spaces around the Olympic grounds, unless it is a major event.